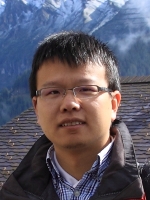 Since 05/2012, he works as PostDoc at the Institute for Information processing (TNT), Leibniz Universität Hanover. His research interests include multiple object tracking and cosegmentation, graphical models, and classification.