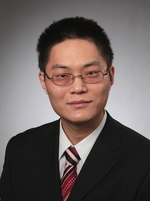 PGP-Fingerprint:
0F8E D1D0 8E69 9CD5 566E 1263 699C 19F0 732B 4341
Yiqun Liu left the Institut für Informationsverabeitung.
Publications and research activities from the time after the departure are not listed here.

From 2007 to 2012, he furthered his study at Universität Stuttgart and concentrated on Signal processing. He received Dipl.-Ing in March 2012 and was working at the Institut for Informationsverarbeitung (TNT) of Leibniz Universität Hannover from December 2012 until end of May 2018.

His research interest is in the field of video coding. From December 2012 to August 2013, he was concentrating on the scalable extension of HEVC (High Efficiency Video Coding). Since Sep. 2013 he has been working on the topic "Motion Blur Compensation", which is an extension to the inter-frame prediction in the current standard. Another research topic of his is the transform and quantization method for video coding, where he tries to apply scene- and prediction-mode-based transform coding and vector quantization instead of the conventional way combining transform and scalar quantization.