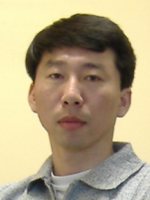 Universität Hannover, TNT
Appelstr. 9A
phone: +49 511 762-19585
fax: +49 511 762-5333
Song Hak Ri left the Institut für Informationsverabeitung.
Publications and research activities from the time after the departure are not listed here.

Ri Song-Hak studied Computer Science at the University of Natural Science, Pyongyang, DPR of Korea. He received M.S.degree from the University of Natural Science in 2001. From 2001 till 2003, he worked as a Research Assistant at the Institute of Mathematics, the State Academy of Sciences, DPR of Korea, conducting research in large vocabulary Korean continuous speech recognition. From 2003 till 2004 he worked at the research team of Network Communication at the Institute of Development Strategy, the State Academy of Sciences, Pyongyang, DPR of Korea. Since December, 2004 he have been a Ph.D student with scholarship of the Gottlieb Daimler-und Karl Benz-Stiftung and has been working towards the Ph.D degree at the Institut fuer Informationsverarbeitung,Leibniz Universitiaet Hannover, Germany.

His current research interests are real-time video coding for H.264/AVC.